Our lab's research focuses on developing new estimation approaches to improve our understanding of transportation systems at increasingly large scales. A summary of current projects, major and otherwise, is given here. Please see the following links for our past projects and a list of all research publications.

Can we create a super-driver by analyzing the real-time data generated by a car, and closing the loop with the driver? Today's cars operate with hundreds of signals using a controller area network (CAN) that provides real-time information on the car and its surrounding environment. We are at an inflection point with cars, as smartphones in 2006, where we have an incredible ecosystem of technologies assembled and only our imagination to limit what 'killer app' the future might hold.

We use CAN to create an application which enables drivers to follow control objectives with super-driver accuracy. We even pushed drivers to new limits by having them follow a leading 'Ghost Car' created totally in software. Six drivers tested various control objectives on the highway in the Nashville area. 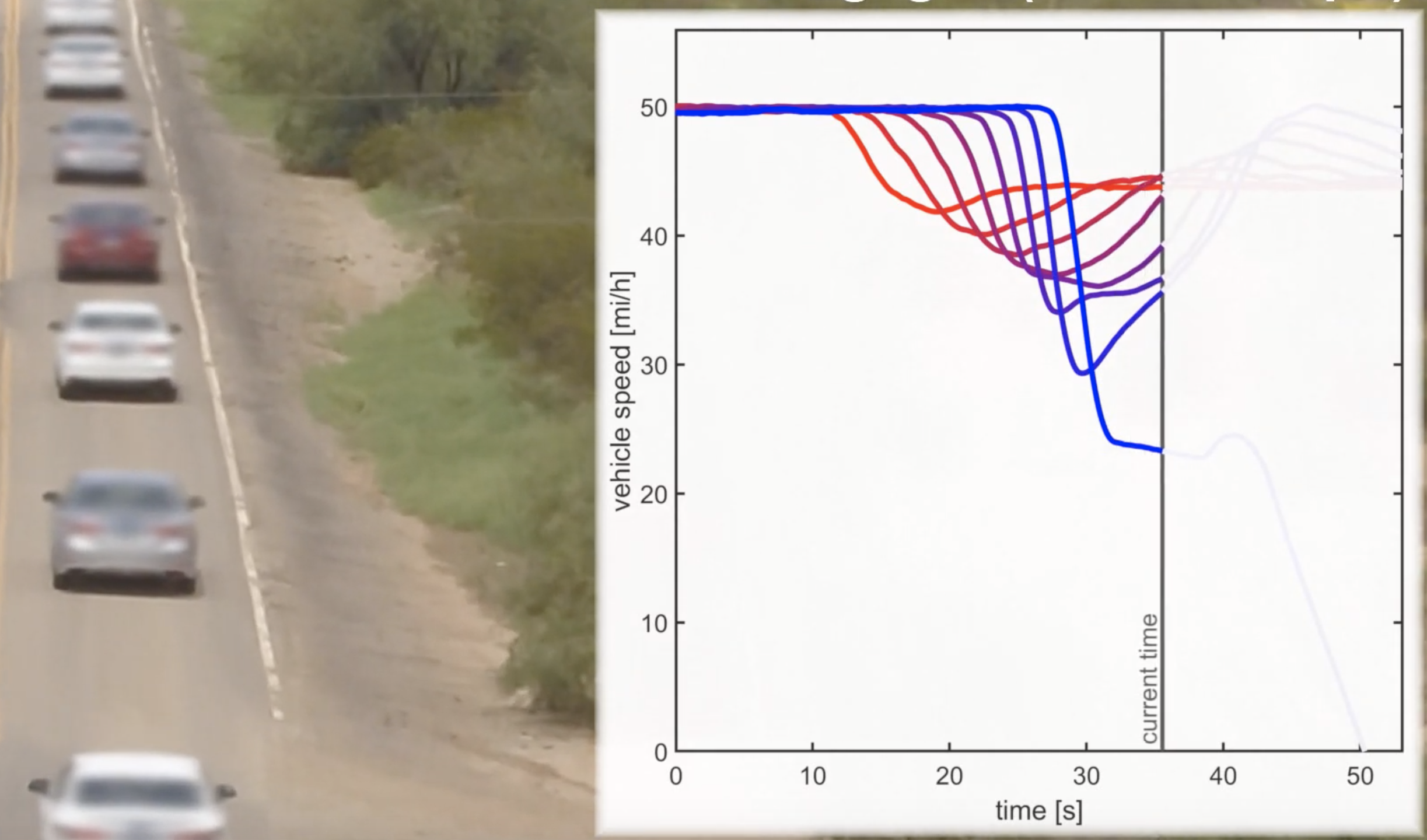 This project will explore how connected and autonomous vehicles (CAVs) can be used to effectively smooth traffic instabilities. Currently, several Reinforcement Learning control methods have been developed that optimize for global smoothing. Experiments will be run in the future which involve real CAVs executing control algorithms in a freeway environment. 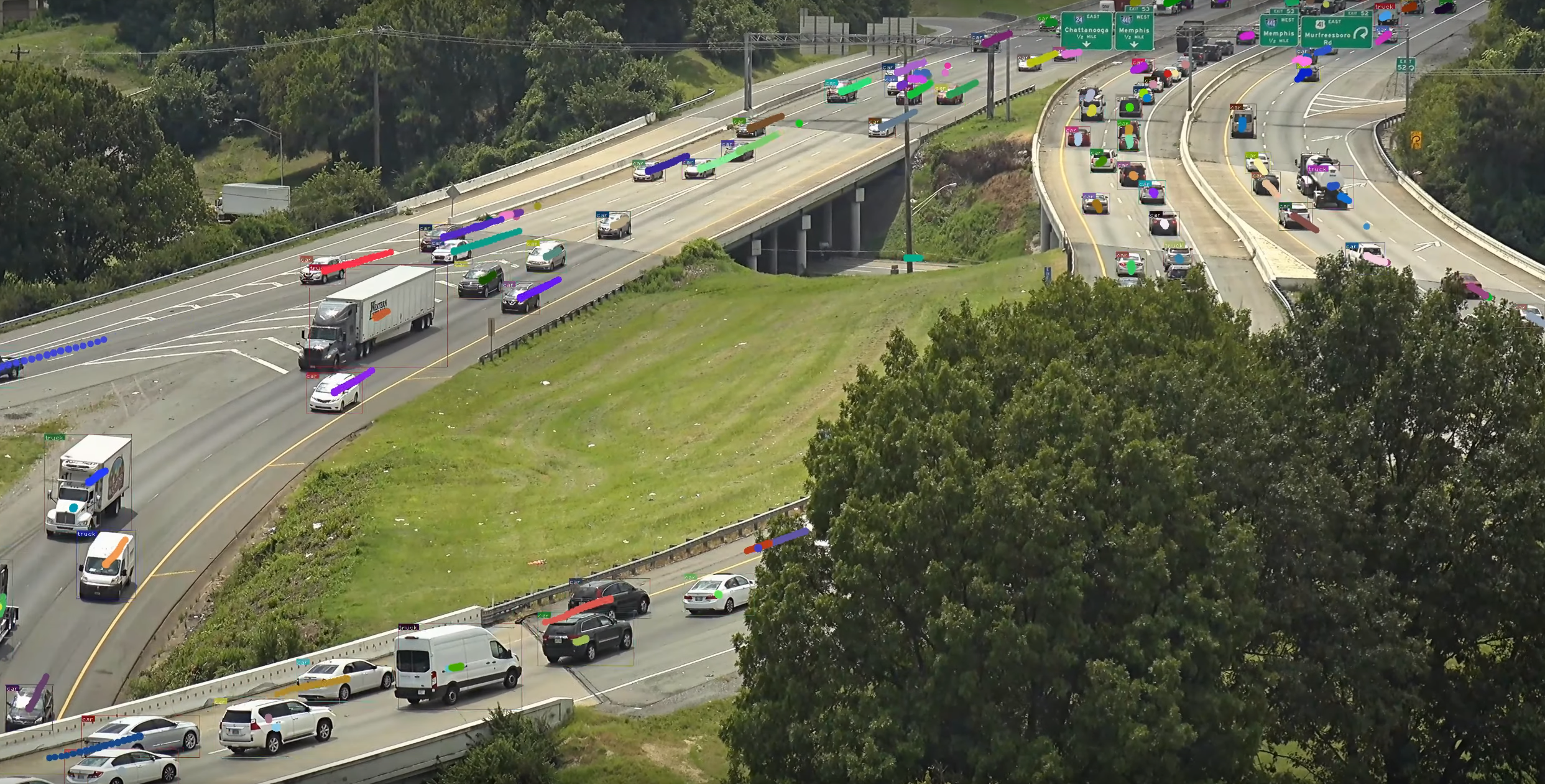 Accurate vehicle trajectory information is the backbone on which modern traffic flow models are built and is also useful for appraising the effects of next-generation transportation technologies and methods on the stability of traffic flow. This work seeks to provide an accurate, real-time source for vehicle trajectory information by leveraging computer vision algorithms to process information from a camera sensor network. The backbone of this work is a novel fast-tracking algorithm developed to drastically reduce the time taken to detect and track objects, especially in sparsely occupied, high-resolution video sequences. This work uses existing tracked object locations as priors for object locations in the current frame, extracting and processing only these relevant regions to detect objects and update vehicle trajectories. Future work on this project will follow 3 main goals: - Tracking objects as 3D objects in real-world space rather than as 2D objects in image space to increase position estimation accuracy. - Re-identifying objects across a large-scale camera network for continuous tracking. - Automatic handoffs and cross-camera management of tracked objects to further increase accuracy and efficiency.

The advancement of in-vehicle sensors provides abundant datasets to estimate parameters of car-following models that describe driver behaviors. The question of parameter identifiability of such models (i.e., whether it is possible to infer its unknown parameters from the experimental data) is a central system analysis question, and yet still remains open. We present both structural and practical parameter identifiability analysis on four common car-following models: (i) the constant-time headway relative-velocity (CTH-RV) model, (ii) the optimal velocity model (OV), (iii) the follow-the-leader model (FTL) and (iv) the intelligent driver model (IDM). The structural identifiability analysis is carried out using a differential geometry approach, which confirms that, in theory, all of the tested car-following systems are structurally locally identifiable, i.e., the parameters can be uniquely inferred under almost all initial condition and admissible inputs by observing the space gap alone. In a practical setting, we propose an optimization-based numerical direct test to determine parameter identifiability given a specific experimental setup (the specific initial conditions and input are known). The direct test conclusively finds distinct parameters under which the CTH-RV and FTL are not identifiable under the given initial condition and input trajectory. 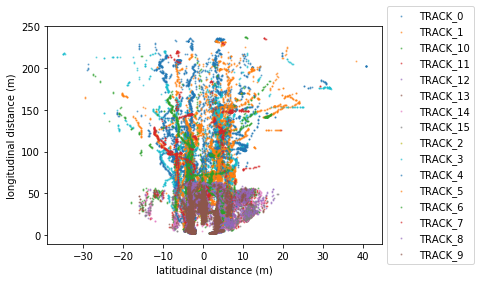 This project explores methods for model parameter estimation on a car-following model using data collected from Adaptive Cruise Control (ACC) enabled vehicles. The proposed methods are batch method least-squares and an online particle filter. Numerical experiments demonstrate the accuracy and computational performance of the methods relative to a commonly used simulation-based optimization approach. The methods are also assessed on empirical data collected from a 2019 model year ACC vehicle driven in a highway environment. Speed, space gap, and relative velocity data are recorded directly from the factory-installed radar unit via the vehicle’s CAN bus. The least-squares method has the fastest run-time performance, and is up to 3 orders of magnitude faster than other methods. The particle filter is faster than real-time, and therefore is suitable in streaming applications in which the datasets can grow arbitrarily large. 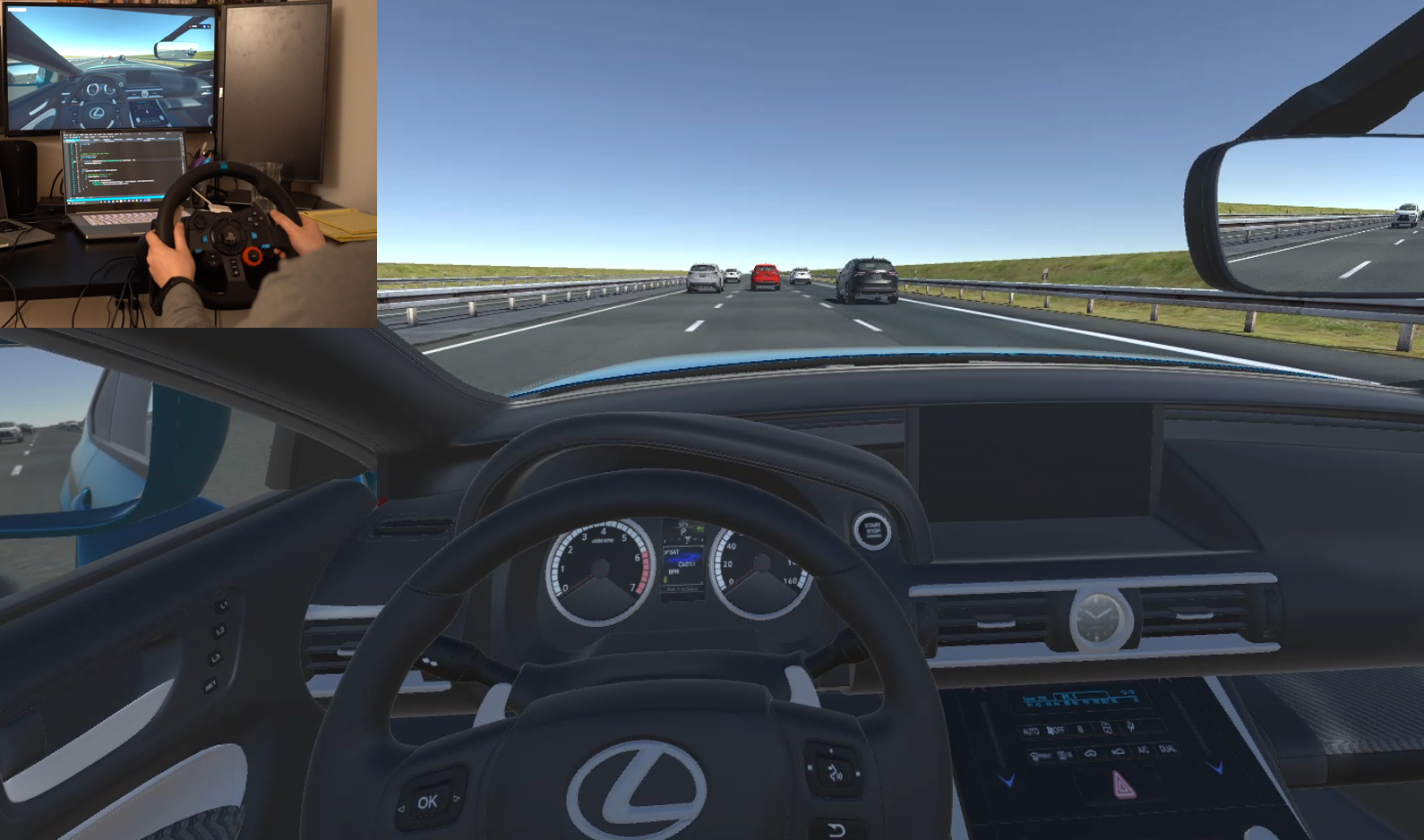 Advanced driver-assistance systems (ADAS) have matured over the past few decades with the dedication to enhance user experience and gain a wider market penetration. However, personalization components, as a mean to make the current technologies more acceptable and trustworthy for users, have been gaining momentum only very recently. In my recent work with Toyota InfoTech Labs, we aim to learn personalized longitudinal driving behaviors via a Gaussian Process (GP) model. The proposed method learns from individual driver’s naturalistic car-following behavior, and outputs a desired acceleration profile that suits the user’s preference. The learned model, together with a predictive safety filter that prevents rear-end collision, is used as a personalized adaptive cruise control (PACC) system. 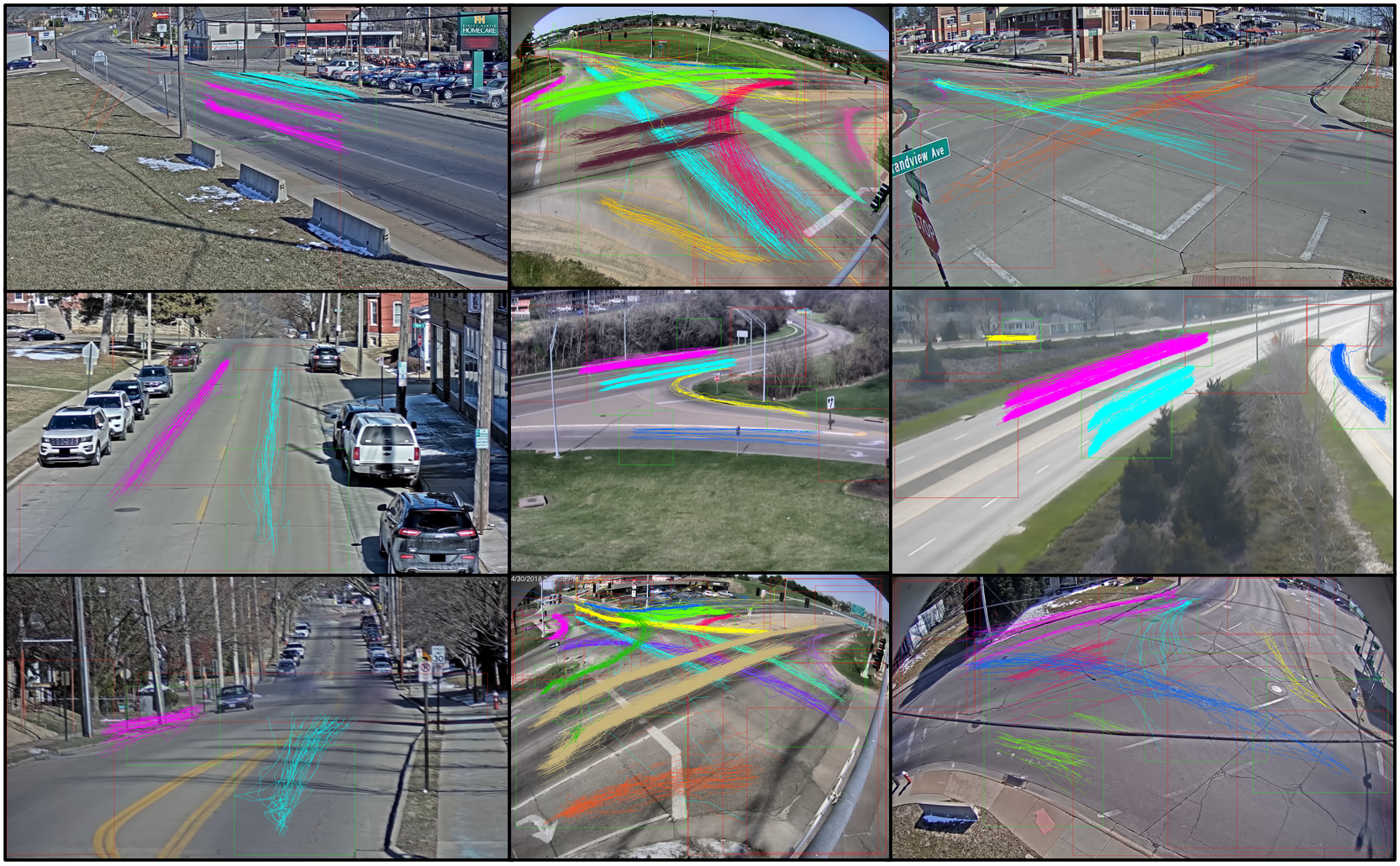 Despite the high utility of traffic volume and turning movement data, such data is still hard to come by for the vast majority of roadways and intersections in nearly every city. Edge computing devices offer a promising tool for recording turning movement data if lightweight algorithms can be designed to run in real-time with relatively modest computational complexity. We utilize our fast-tracking approach for traffic counting without ever performing (slow) object detection on an overall frame of video. Instead, only a few portions of the image are cropped and used to detect objects within the frame. The method achieves competitive performance on the public evaluation server for Track 1 of the 2021 AI City Challenge (7th overall on the first 50% of data), and significantly speeds vehicle counting relative to a traditional tracking-by-detection-based approach.